Playing IF on Windows 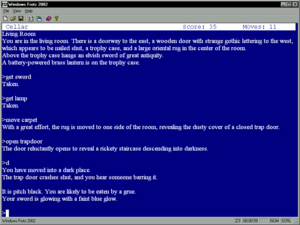 The first thing you need to do to play Interactive Fiction is get yourself an interpreter.  While there are interpreters for just about every platform out there (Windows, Mac, Linux, iPad, iPhone, Palm, etc) on Windows the best one going right now is Windows Frotz. It can load just about any Z-Machine byte-code file you can throw at it, so whether it's a classic Infocom game or a new game written in Inform.

Also, you can customize the colors and fonts so it looks just like your old-fashioned DOS 386 machine. Click on the links below to download and then just unzip.  If your'e looking for games to play, check out the IFDB which includes many classics as well as newer games. 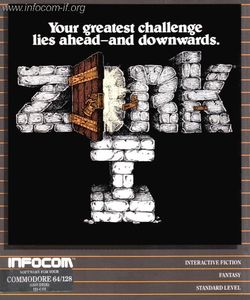 This site is a resource for those interested in playing or writing Interactive Fiction.

Interactive Fiction (IF) emerged from the humble orgins of text adventure games, the most famous known as "Colossal Cave" or simply "Adventure" written by Will Crowther in 1975-76 and expanded by Don Woods the following year.

In the late 1970s, a group of MIT students developed a larger version known as Zork.  In order to run Zork on the emerging class of microcomputers, Joel Berez and Marc Blank created a company Infocom where they wrote a virtual "Z-Machine" compiler which would compress the game logic and text enabling Zork and subsequent games to run on any system on which a Z-Machine interpreter was available.

Infocom went on two write more than a dozen best-selling games, going beyond basic adventure style into murder mystery genres, science fiction and comedy.  Infocom had its heyday in the early 1980s selling hundreds of thousands of games on the IBM PC, Apple II, Commodore 64 and other popular microcomputers.  Their most famous work "The Hitchhiker's Guide to the Galaxy" was written in collaboration with the very late Douglas Adams, author of the novel and BBC radio show of the same name.

The company was eventually sold to Activision in the late 1980s as text-based games were superseded by graphics adventures.

Thanks in large part to some very clever open source programmers, the Z-Machine architecture lives on with Frotz interpreters and source code available on just about every platform known to man and possibly several others.  Programming tools like Inform 7 and TADS 3 have inspired a new generation to take up the gauntlet and create new works of Interactive Fiction that rival the best of Infocom.