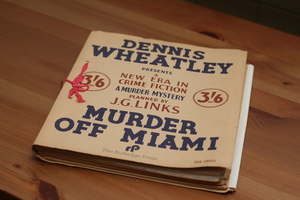 One of the things that's always impressed me with the works of Infocom was their lavish attention to the "out of game" experience.  That is the extra printed materials or props that were part of the packaging.  In the case of the murder mystery Deadline, these included documentary evidence such as photos of the body, transcribed interviews, a police report, fingerprints, a lab report, even suspicious looking pills.  Over the years, Infocom built a huge part of its reputation on these extra materials, known inside the business as "Feelies."

But one of the things I didn't know until I watched the Infocom documentary included with the Get Lamp DVD was that this idea of creating a non-linear user-driven mystery built around documentary evidence was originally created by an English writer named Dennis Wheatley back in 1936!  Wheatley and his partner JG Links created four different murder mystery dossiers that went on to sell hundreds of thousands of copies in the late '30s.  They were re-issued almost 50 years later and can still be found occasionally on Amazon and eBay.

Get Lamp director Jason Scott wrote about it in his blog and included photos of some of the materials.

And what else I found out was that nearly everyone I talked to who had something to do with Infocom’s feelies had owned or knew of this interesting property, Murder Off Miami, which had originally been published in… 1936.

1936! Of course, that’s not the edition that everyone owned at the time of the dawn of Infocom… they owned the 1979 re-issue, which did its best to recreate the original work. This was, in fact, an edition I owned myself, because my dad got it for his kids and we did our best to honestly solve the mystery within.

The “book” was basically a bound folio, with what seemed to be a massive sheaf of papers inside, including photos, maps, telegrams and even pieces of evidence like hair. You were basically being given the “case file” of a sensational murder case, and as you browsed through the writings and clues, you were to come to the conclusion of who committed the murder and why, and at the end you would open a sealed portion of the book to see if your answer was correct.

It’s very well done. Here’s some shots of the inside: 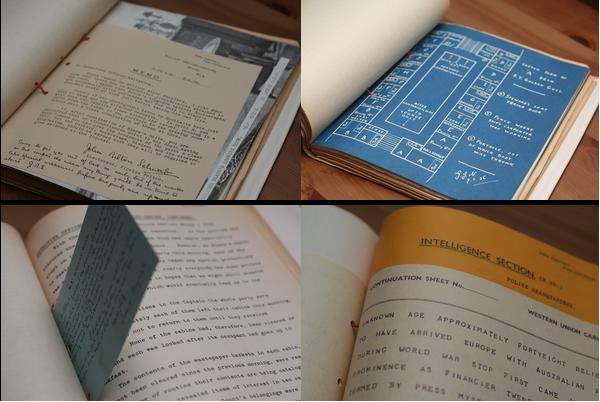 There's a more detailed example of some of the items in "Murder off Miami" at Propnomicon.

Infocom co-founder Dave Lebling acknowledged the influence of Dennis Wheatley's works on Deadline in a 1987 interview:

I've managed to pick up a set of Wheatley reprints from the 70's and 80's as well as a couple of original from the 1930s and will post details and photos in the future.  If you're interested in these books, you can find them on Amazon, Alibris and eBay on occasion. However, keep in mind that it is only the 1930's originals (Hutchinson) and the softcover "quarto" reprints from 1978-1982 (Webb & Bower, Rutledge or Mayflower) that have the physical evidence with telegrams, a patch of a bloodstained curtain, cigarette butts, tickets, bobby pins, match sticks, etc.  The hardcover reprints from 1986-1988 (Webb & Bower or Magnolia) include photos of these items.  While they are still impressive, they don't quite have the same emotional impact.  So if it's cheap (under $10) has no dustjacket and doesn't specify the binding, it's most likely a hardcover reprint.

If anyone has an original Wheatley dossier from the 1930s in good condition or that they'd like to donate please let me know.

This blew my mind when I saw it in Get Lamp. It made me wonder if there might be other texts like this even farther back.