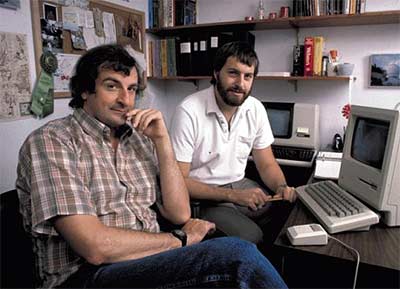 The original interactive fiction authors at Infocom were heroes; they combined creative puzzles with compelling prose and great packaging.  Over the years, I've ready many good interviews with the Infocom implementors.  I've gathered up as many useful links as I could find from online sources as well as some old print magazines from back in the deay.  Here are a couple of short excerpts as well as links to the full interviews.

What do you think had made Infocom initially so successful as a game developer and publisher before its demise under Activision in 1989?

For its time, Infocom had very impressive technology: the multi-word parser was a huge improvement over the two-word parser that was state-of-the-art in those days, as well as the compression techniques that allowed Infocom to store an astounding amount of game play on a floppy disk which, in those days, held only about 80K of data! Also, Infocom as a company had a near-obsession with quality, which showed through in everything from package design to the scarcity of "bugs".

Among all people you have collaborated with, who gained your highest respect? Why?

I mostly collaborated with people inside Infocom. I always found Marc Blank to have a game-sense or puzzle-sense most like mine, and we collaborated easily on several games, most notably Enchanter. I think I was most in awe of Steve Meretzky, whose reservoir of ideas never seems to run dry, and who has always been a meticulous and dedicated craftsman about his work, and cares deeply about every aspect of it. All this while denying that he is a programmer.

What is your philosophy in designing puzzles for adventure games? In other words, what makes a great puzzle and what makes a poor one?

I've written extensively about this, and to answer the question completely would take much more time than is available in an interview. The basics, though, are that a puzzle must be fair, it should be natural to its environment, the information needed to solve it should be available in the game, and when the player finally learns the answer, if he didn't figure it out for himself, he should slap himself on the forehead and say, "Of course!!!" rather than wanting to shoot the designer.

Had elaborate packaging been one of Infocom's ideas from the start?

Click through to the links below to Adventure Classic Gaming to read the full interviews.

And more interviews at XYZZY News:

And some highlights of random interviews, from the Infocom Homepage: