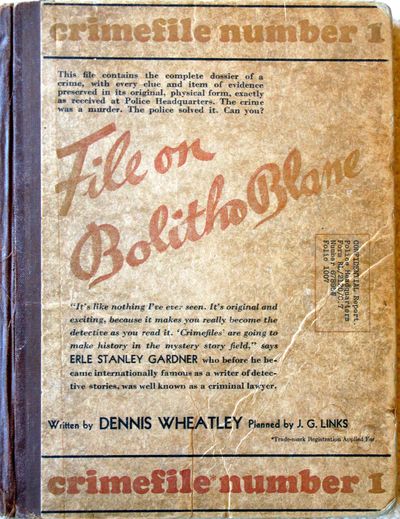 I happened to be in a small dusty used bookstore a few weeks back, the kind that are becoming rarer and rarer.  I was killing time before a business reception and thought I might find a couple of Robert Goddard paperbacks.  As the owner was ringing me up I looked around and noticed they had a few old first editions and miscellaneous old books from the 1920s and '30s amidst paperbacks and long-gone hardback bestsellers.  I asked the owner if he ever ran across any old Dennis Wheatley Crime Dossiers from the 1930s.

It's hard to explain to people what these are.  They're generally quarto, softbound ribbon-tied detective stories.  Though instead of a traditional linear narrative, it's a dossier of printed evidence, police reports, interview transcripts, photos, telegrams, and other evidence, such as matches, a strand of hair, etc all bound together.  As I explained he was giving me the usual blank look and I figured this conversation would end as it usually does with the owner smiling politely and saying he's never heard of such a thing.

But instead he leans behind the cash and reaches for a book and says "You mean, like this?"  He's holding a 1936 William Morrow hardback edition of crime file number one "File On Bolitho Blane" the US title of "Murder off Miami."

Holy sh*t!  I thought to myself.  And actually, I said it out loud.  I've got the 1970s reprint editions, but not the orginals.  Heck, I'd never even seen one before.  This is something I'd expect to find in some rare book museum or private collection somewhere.  He'd just bought it a couple of days earlier and hadn't gotten around to shelving it and probably wasn't even sure where to put it.

The long and the short of it is, I walked out of there with a fantastic find which set me back less than a decent bottle of wine.  While it's not the Guttenberg Bible, it's still pretty rare.  And for those who know their history of Interactive Fiction or have seen the brilliant documentary film Get Lamp, Dennis Wheatley Crime Dossiers were the inspiration for the creative packaging and props that Infocom debuted with Deadline.

Sometimes you just get lucky.

Below are some photos from the book.  The last photo is the cover of an even more rare ribbon bound, 1st US Edition that I was able to find online recently. So now that I've got two, I'll have to figure out where to donate one of these. Perhaps an upcoming IF competition?

If anyone has an original Wheatley dossier or similar Crimefile books from the 1930s in good condition that they'd like to donate please let me know.

I'm not sure if it's nerdy or lucky.
-Zack