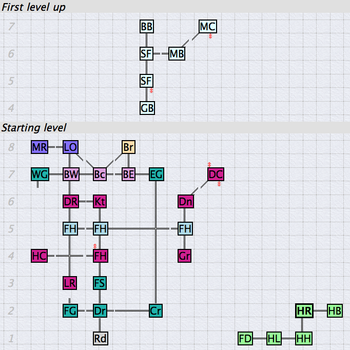 Just in time for the New Year, the good chaps working on Inform7 issued an upgrade to version 6G60 with much improved mapping.  I'm always wary of compiler upgrades on any programming project; you sometimes find that language or libraries have changed ever-so-slightly and what should have been an easy recompile now becomes several hours of unanticipated work.  And then there's the likelihood that the IDE menus and dialogs have been "improved" to be better, but in reality are just different.

In this case, this upgrade literally took 5 minutes --including the download time.  Everything worked exactly as it should and I resumed working on my project with no changes.  No changes, except for the improvements in the mapping and a good many bug fixes.  Congrats to the Inform7 team for such a smooth upgrade process!

As a result of the improved mapping, I was able to find and fix a couple of problems that were lying in waiting.  While the mapping is not perfect, it is substantially better than it was previously.  (You can click on the graphic above to see a larger version of the game map.)

For those who are curious, the latest Alpha version of my game The Z-Machine Matter now clocks in at 49,362 words, 166 pages, 145 things, 37 rooms, 50 hints, 20 clues, 11 extensions, 5 NPCs and 1 dead body.  I've blown through the limits of the Z8 file format, so the game now requires a Glulx interpreter to run.  This is about 3x larger than the game was back in early December when I did my initial Alpha testing.  (And I hope, much improved, based on suggestions from testers!)

I reckon the game is somewhere around 25% complete at this stage, but it's hard to know.  I still have a couple more NPCs as well as more rooms, objects and clues to implement.  That said, I'm eager to get more input from Alpha testers in advance of IntroComp.