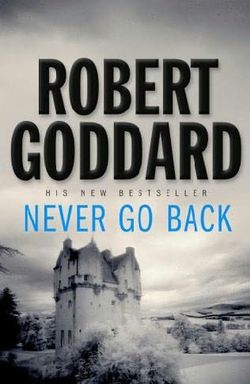 This past year I discovered the best known secret in mysteries: Robbert Goddard.  While extremely prolific and well-known in the UK, he's virtually unknown in the US.  Still, his works are tremendous.  Stephen King considers him one of the best mystery writers ever.  I've read half a dozen of his books with five more piled up on my bookshelf for the coming months.  My modus operandi is that if I see a Robert Goddard book in a store, I just buy it and put it aside for a special occasion.

Goddard is one of those rare writers who delivers exquisitely written prose, compelling characters and a plot with enough twists & turns to make you feel like you're headed down a mountain pass in the alps.  Admittedly, there is a certain structural similarity in many of his books: past deeds newly discovered by a ne'er do-well character who wants to redeem himself, but darn it, it works.

If you're intrigued I recommend starting with "Into the Blue

," part of three free-standing books centered around Harry Barnett, or "Beyond Recall

."   They are all excellent, filled with kidnapping, murder, family tragedy, blackmail, remorse and all set in dramatic English settings.  Several titles are available as eBooks on Kindle

Goddard gets compared to Daphnie Dumaurier and later stage John LeCarre, but I think he stands alone for the sophistication of his plots.  If you like mysteries, you owe it to yourself to pick up one of his works.  And perhaps he will inspire your own creative writing efforts in IF.

Beyond Recall's so good we need to read it twice, eh?