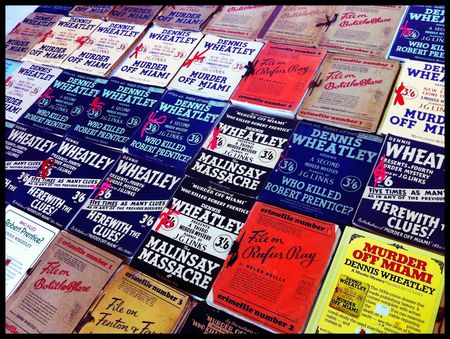 It was while watching the Get Lamp documentary last summer that I first learned about the Dennis Wheatley / JG Links crimefile dossiers from the 1930s.  These books were the first of their kind, enabling armchair detectives to solve a murder mystery with nothing but the evidence laid before them, consisting of police reports, interviews with suspects, telegrams, blueprints, newspaper stories, photos and even physical evidence in the form of matchesticks, hairs, bloodstained curtains, poison pills and the like.  All of the evidence and documents were held together in a ribbon-bound stiff cardboard folio.  The Wheatley dossiers were a breakthrough in publishing and went on to sell hundreds of thousands of copies around the world.

The Wheatley crimefiles were reprinted in the late 1970s as high quality facsimiles of the originals.  They were almost indistinguishable from the originals, execept for an added dustjacket and the fact that they are generally in better condition.  While Wheatley only published four books of this genre, to me they were legendary for inspiring the packaging of Infocom's Deadline, The Witness and subsequent games.

Somehow I managed to find a few of the 1970s reprints on eBay.  And then a few more.  And then I discovered a 1930s first edition in a bookshop.  Many months later at significant cost and effort I've accumulated several dozen high quality 1970s reprints and original 1930s editions from booksellers across the US, Canada, England that are now stacked up in my home office.

I'm going to keep just one of each of the editions.  The rest, I've started giving away as prizes for various IF competitions and to testers of my game The Z-Machine Matter.  Contact me at ZUrlocker via hotmail if you have a competition in need of prizes or if you'd like to test the The Z-Machine Matter. (And yes, there's another new version based on recent alpha feedback.) 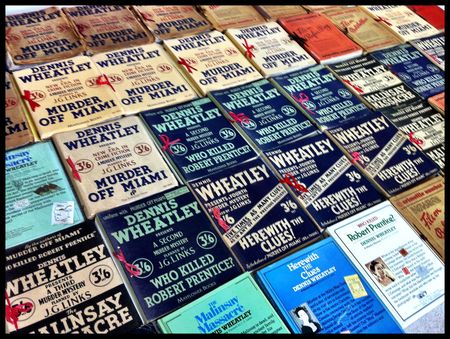 Did you know that there is an old 8-bit game from 1987 based on one of the dossiers? Namely:

Here are some links:

As someone who has recently acquired a number of Wheatley's dossiers, do you have any tips for others interested in acquiring one? (Short of winning an IF competition or being an exceptional tester for your game. :-) Things like what sort of prices you expect to pay, and what sort of questions to ask to ensure you're getting a complete (if worn) copy?

Thanks for the tip on the game version. Would live to get a version of that! Coincidentally, Dennis Wheatley's son was also in the game business. Aaron, if you want a 1930s edition, let me know and I'll put one aside for you. (But definitely not in as good condition as the '70s reprint I gave you.)

I'll post some tips on buying Wheatley's. You can often find them on Allibris and AbeBooks. But the trick is to make sure there's a photo of the cover so you know what you're getting. Certainly avoid the 1980s hardcover editions. Also if anyone wants to do an Inform7 code review there's a 1930s first edition that awaits...