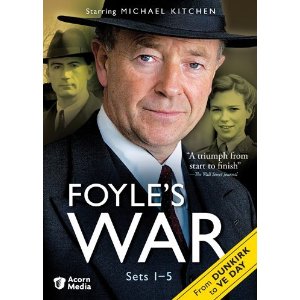 was totally under the radar for me.  I missed it when it was on BBC America but my wife must have caught an episode because the next thing I know we had a box set of DVDs.  ABC's LOST was long gone and so one Sunday evening we dove in.

If you're a fan of British police procedural novels (or mystery in general) it's a fantastic show.  It's also set in the coastal town of Hastings during World War II which creates a fascinating context.  Many of the stories that are part of the fabric of Foyle's War are true stories that have never been told before. The result is a unique blend of historical fiction, compelling characters, and expert-level whodunit.

Detective Chief Superintendent Christopher Foyle is played brilliantly by Michael Kitchen as a man who has seen to much in his life, but still believes in doing the right thing, while keeping a stiff upper lip.  Foyle's under-stated character develops over the series as he deals with the British upper class, politicians, criminals and balances that with the legitimate fear he has of his son's active role in the RAF.

The show ran on ITV for 6 years culiminating in 19 episodes, culminating in a finale that coincided with Victory in Europe.  By popular request, the show was brought back for 3 more episodes immediately following the end of the war

.  All of these are now available on DVD via Amazon.

Now that the series is over, I miss DCS Foyle on Sunday evenings.  And I can't help but wonder what the personal vendetta is that he's dealing with in America.  If you have a theory, please post a comment below.

Trivia:  The name Christopher Foyle was inspired by the late eccentric bookseller Christina Foyle whose recently modernized shop has been a fixture on Charring Cross Road for more than 100 years.  And I'm happy to say it's an awesome bookstore.

Actually, Foyle's trip to America was prompted by the ending to the Series 2 episode "Fifty Ships." Don't want to post more without ruining that great episode!

Syl, thanks much. I was wondering if that was the case. Makes sense. I hope it makes it to the screen one day.
--Zack