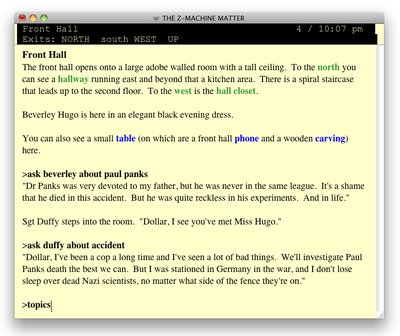 One of the great things about working in Inform7 is the ability to incorporate extensions and code fragments from other authors.  I can't say I always understand exactly how to use these extensions, but for the most part, they work great.

Above is a screenshot of The Z-Machine Matter running in the Mac Zoom interpreter showing off the use of Aaron Reed's Keyword Interface extension.   The idea is to highlight important objects or locations making it easier for newcomers to know what to interact with. You can also see Eric Eve's Exit Lister extension at the top left of the status area.

Using extensions is easy.  First include the code in your source:

Section - Extensions
Include Exit Lister by Eric Eve.
Include Keyword Interface by Aaron Reed.
Include Menus by Emily Short.

Then in the case of Keyword Interface, you just put text format directives [o] [x] to highlight certain objects or [d] [x] for directions or locations.

The Front Hall is north of the Front Steps.  "The front hall opens onto a large adobe walled room with a tall ceiling.  To the [north] you can see a [d]hallway[x] running east and beyond that a kitchen area.  There is a spiral staircase that leads up to the second floor.  To the [west] is the [d]hall closet[x].[first time][paragraph break]A beautiful blonde woman in her early twenties greets you.  She has a glass in her hand.  'Hello there...  I'm Beverley Hugo.  You must be Mr Dollar, the insurance investigator the police said would be coming.'[only]"

Similarly, I've used other extensions like Assumed Conversers by Michael Martin and Menus by Emily Short, and a half dozen others to give The Z-Machine Matter a lot more fit & finish than I could otherwise code on my own.

One of my Alpha testers suggested implementing a TOPICS command to make it more obvious how to interact with the other characters in the game.  There are full-blown conversation extensions out there, but to keep it simple, I just borrowed a couple of lines of code inspired by Implied Conversers and was able to get something going in under an hour.  How cool is that?

Alpha testers, if you can fire up the latest version that's much appreciated.  It's available at the usual Box.net location or let me know via email if you'd like me to send it to you.

I've really enjoyed reading about your progress and work on your game. It's been fairly inspiring as I'm taking my first steps on a similar long road. (Well, really, I'm standing at the beginning of the road looking at the map and trying to plan my route without being entirely certain what some of the symbols mean. But you get the idea.)

Go for it! I strongly recommend creating some rough guide or plan for what you're going to create. Jumping in and coding a first project is daunting without some kind of roadmap. (Actually, it's daunting in either case, but it may be more doable with a plan!)
Good luck, keep me posted.
--Z