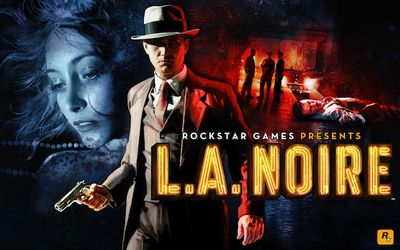 I don't often get excited about big-budget video games, but Rockstar games' release of L.A. Noire

has made me stand up and take notice.  It's of a similar genre as my own IF game The Z-Machine Matter, though obviously with a multi-million dollar production budget and heavier on the noire elements including gruesome serial murders and other violent crimes.  The game appears to lean heavily towards the investigative side of things, rather than the standard first-person shooter action. And of course, there's glorious use of technology to recreate an eight mile landscape of crime-infested Los Angeles of 1947 as well as unique facial motion scan technology that lets you catch every nuance of the actors as they respond to your question and accusations.

The game has been getting excellent reviews from mainstream media including The New York Times and others.  By focusing more on detection and less on action, Rockstar hopes to bring in more casual gamers and fans of traditional detective noire movies and books.

While it's not exactly Interactive Fiction in the style of The Witness, it's a heckuva a step in the right direction and it should be interesting to see inspires a similar approach from other studios.  The game includes many elements of a traditional IF mystery game from exploring vast regions, discovery of clues & evidence, and interrogating suspects.  Plus it's all wrapped up in a beautifully produced game with great visuals, music and top-notch acting.

Check out the trailer below for a preview of how LA Noire looks.  You can pick it up at Amazon

as well as other retail outlets.