After some final tweeks on timing and moving some objects around I'm ready to hit the upload button and put the latest alpha release of The Z-Machine Matter into the IntroComp hopper.  The source code clocks in at about 230 pages, 10,600 lines, 70,000 words.  There are 194 things, 44 rooms, 5 NPCs and at least 2 dead bodies.  And that's just the first two acts.  So who knows what will happen in the third act?  (Sometimes, I'm not even sure myself.)  There's also a 12 page Infocom-style PDF manual with mocked up packaging, on line Help, Hints, a Trizbort map, a mostly up-to-date walkthrough file and a fake ad.

Based on alpha feedback, I've fixed more than a hundred typos, bugs, disambiguities and other problems. I have added dozens of new commands, synonyms, IF references, "understand as a mistake" statements and far too many "it is likely" commands.  No doubt there is plenty more code to be written in the next act of the game and even more bug fixes before the game is complete.

Some months ago I started this project by writing a 20 page document that defined the background, storyline, characters and plot.  Then I picked up Aaron Reed's excellent book "Creating Interactive Fiction with Inform 7

" and started coding a prototype.  I created the cover art and fake packaging early to help set the mood and make clear the game is inspired by the legendary titles of Infocom.  Over many months, that prototype has evolved into something that may now be a reasonably playable couple of introductory scenes.

Nonetheless, it has taken a lot of time and I'm ready to take a break while IntroComp is in progress.  I hope that anyone who has not yet played the game will test it out and send me feedback, suggestions and ideally a SCRIPT transcript file.  And if any of the alpha testers want to do a code review or help me with some programming tasks during this time, please let me know.  No doubt my Inform7 code leads a lot to be desired.

Agent Kong really went beyond the call of duty for his many bug reports.  He earns an original 1930s Dennis Wheatley Crimefile.  That'll be in the post shortly.  And thanks to Adam for reporting a last minute bug that broke just about everything in the game! (Glad I found that one.) Adam will also be getting an original Dennis Wheatley.  And I'll also be sending out several 1970s Dennis Wheatley reprints to other testers in the next week or so.

And kudos to Jason Scott whose documentary film 'Get Lamp' and Chris Huang whose excellent game 'An Act of Murder' rekindled my interest in IF. I hope in some small way that The Z-Machine Matter can also pay tribute to the earliest days of Interactive Fiction and the games of Infocom that inspired a generation of IF authors. 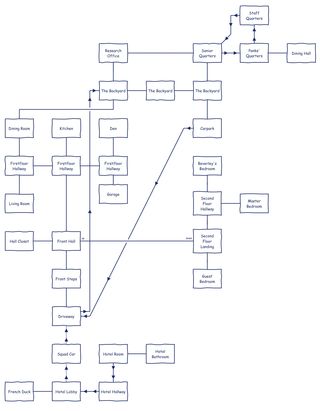 Erwin Genstein, creator of the mapping program Trizbort saved the day!  Now that my Windows machine passed away I had no ability to run Trizbort so he ran it himself on The Z-Machine Matter game and sent me the map output.  Thanks!  Much appreciated.  I'll put a Dennis Wheatley in the post to you.  I've included the map in the latest update to the manual which I'll be submitting along with my game to IntroComp shortly. I created a mock print ad for The Z-Machine Matter some months back.  I tried to capture the style of Infocom's old magazine ads. Yes, yes, I really should be finishing up the Alpha.  Or at least working on a better map.  But it was kind of fun.

Also for any testers who requested Alpha access but have not yet sent feedback.  Please, please, please do me a favor and send me your SCRIPT transcript.  I will be eternally grateful. 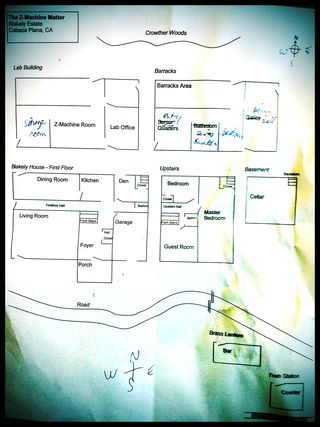 A while back, I created a map for The Z-Machine Matter, shown above.  It was just a simple 2D mockup for my own planning purposes using some piece of free software that I've since lost.  I thought I could get something better with Trizbort on Windows but for some reason it doesn't do anything.  And today, the power supply on my 10 year old Windows XP machine blew up (loud crackle, bang and smoke!) so I'm not going to get Trizbort working any time soon. (Luckily all my development is on a more recent MacBook, and yes, I do make backups regularly.)

For now, I've just put the nasty photo of the printout with handwritten corrections into a revised version of the manual.  And of course, there's another revision to the Alpha game that incorporates some more feedback from testers.  Thanks guys! 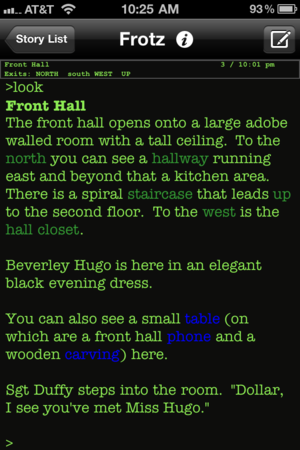 Craig Smith has issued an updated version of Frotz 1.5.3 for the iPhone and iPad that fixes a number of bugs. Not only does this eliminate some previous instability in Glulx games but most importantly it restores functionality to open games sent as email attachments.

Craig, thank you!  My Alpha testers salute you!

There is a new version of The Z-Machine Matter alpha now available that includes some significant improvements.  Thanks to all those who have sent me their SCRIPT transcripts.  (And if you haven't there's still time.  But please download the latest version.  Contact me via email.) 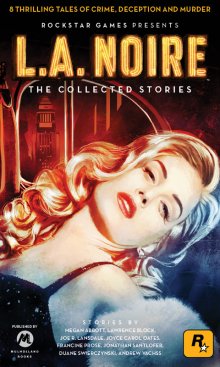 The good folks at Rockstar have not only launched an epic 1940s detective game with L.A. Noire

, but they've also teamed up with Mullholland Books to publish "L.A. Noire: The Collected Stories

If you're interested in crime fiction or genre detective games, you've got to check this out. The collection runs to 192 pages and is available as an eBook only via Apple iBooks, Amazon Kindle and Barnes & Noble for just $0.99.  How can you go wrong for that price?