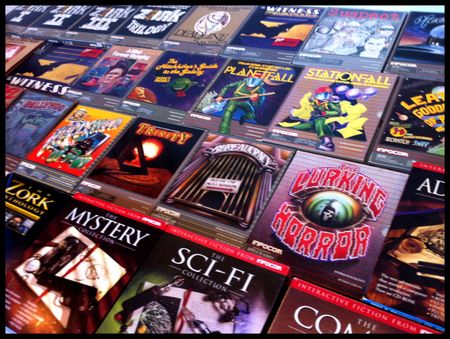 After I saw the "Get Lamp" Interactive Fiction documentary film last summer, I began to have deep regrets about the Infocom games I had collected and somehow let slip through my fingers around 20 years ago. When Infocom released the Lost Treasures series, I decided to consolidate space and get rid of all of my original Grey Box editions in a misguided attempt at Spring cleaning.  (Luckily, I did keep all the feelies!) While my collection was not complete, I had all of the Infocom Mystery titles as well as a good number of Science Fiction and Comedy.  Most of them I had picked up in the 1990s at bargain prices.  So it was quite a depressing realization that in recent years, Infocom games had become even more rare.

Nonetheless, after many months and at some considerable effort, I managed to rebuild the collection from eBay and Amazon.  I also added quite a few additional titles in the process including original "folio" editions of Deadline, The Witness and Infidel.  These were the original packages and were influenced by the famous Dennis Wheatley crime dossier reprints of the 1970s. I'm especially proud of those and they weren't outrageously expensive either.  If there's interest I'll write up a separate post on those later in the summer.

The price I paid for my Infocom titles varied from $5 to $49, most under $25.  Though I was tempted, I drew the line at not paying more than the original list price for games.  Some titles, such as Sherlock, Stationfall and Border Zone seem to be quite rare, so these all came right up to my limit and I was often outbid in the process.  Still, Border Zone was one of the games I was very fond of, so I learned to be patient.  Also, since I already had all the game files, I didn't really need the disks.  That said, I still bought most of the Activision collections: Adventure, Sci-Fi, Mystery and Comedy just out of compulsion. 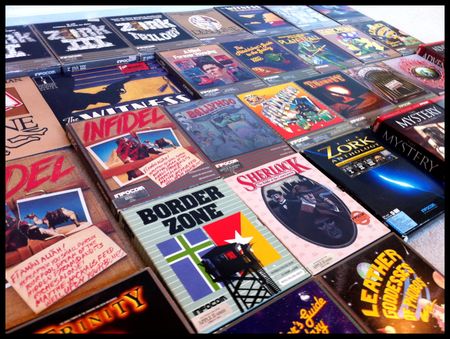 Anyways, I'm very proud to now have so many of these Infocom titles taking up space in my cluttered home office.  And when I think about all the Dennis Wheatly crimefiles I've bought in addition to the Infocom games and time spent on programming my game The Z-Machine Matter, I realize what an expensive movie "Get Lamp" turned out to be.

Still, it's cheaper than collecting cars or guitars.

hey man, impressive collection! and fun blog entry! keep up the good work! hit me up when u can, maybe PM me on the forums, im bouncing an idea around some of the IF bloggers and wanna know what u think about it.
thanks,
cory

Congrats! I'm slowly building a similar collection by keeping an eye on ebay and hunting anything I can get on the cheap! Still missing a handful of grey boxes, but hopefully it's just a matter of time.

Agressive customs taxes make me think twice before buying outside of EU, which makes things a bit harder, and of course some folio editions and other rarities are way beyond my scope. Other than taht I hope to have a complete standard edition set soon.

I made a pics gallery some time ago which is still WIP. Photos hosted at Imageshack tend to get easily offline, so I'm currently migrating them to my own web space.

It's encouraging to see you finally got a complete grey boxes set. I hope I'll get there too! :-)

Pretty cool. I own just one Infocom original from back in the day, but it's a goodie. That's Suspended with the board and the moulded mask.

Greybox Suspended is impossible to find. I have every other box, and almost every feelie, except Suspended.

Nice collection, BTW! It's good to see another fanatic about stuff, instead of just bits.

Wow all these comments. Nice to see so many Infocom fans. Note that I didn't collect *all* the greybox editions. I had no interest in the Enchanter series and skipped some of the titles liked Cutthroats and Seastalker. Also, I'm actually still missing Starcross and Suspended. But it was exciting as heck to actually get the Folio editions of Deadline, The Witness and Infidel. Oddly enough those were not expensive.