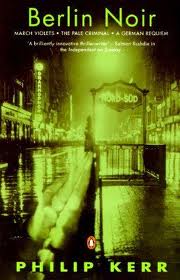 I've long made it my practice to read novels, mostly mysteries, set in locations to which I travel.  Many years back, I read Philip Kerr's "March Violets", part of his "Berlin Noir

" trilogy, en route to Germany.  I immediately devoured the follow-on novels.  The novels tell the story of a private detective, Bernie Gunther, and his saga of crime investigations in Germany before and immediately following World War II.  Think of it as a blending of Raymond Chandler and Len Deighton and you won't be far wrong.  Kerr blends enough historical fact around the Nazis to give the novels a dark and distinctly disturbing narrative.

The only thing criticism I had of Philip Kerr's "Berlin Noir" trilogy was that it was too short and outshined all of Kerr's other novels.  Alas, Kerr has since published four more recent Bernie Gunther novels since 2006.  I've just finished "The One from the Other

" and it absolutely hits the mark.