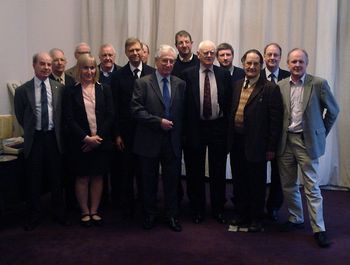 Photo of the BBC Micro team from 2008

This past weekend commemorated the 30th anniversary of the celebrated BBC Micro, designed and sold by Acorn Computers.  Although I grew up in Canada, I was fascinated by the British computer scene that I read about in Personal Computer World and other UK magazines.  I was intrigued by these strange machines such as the Sinclair ZX81 and ZX Spectrum, the Acorn Atom, the Dragon and others.

Acorn was founded by ex-Sinclair employee Chris Curry and although both companies went on to huge success in the market, there was always an intense rivalrly.  That story is well told in the BBC 4 comedy drama "MIcro Men" (called "Syntax Era" during production) originally aired in 2009.  While the dialog is sometimes a bit over the top, it's intended as a light-hearted comedy, so don't take it too seriously.  I don't know if Sir Clive routinely threw phones out the window (he always appears so calm in interviews) but the fight at the Baron of Beef pub in Cambridge really did happen and was reported in the press.

The BBC Micro and the Sinclair machines are largely responsible for the development of the early microcomputer industry in Britain and helped launch the careers of numerous engineers, programmers and executives in the IT industry today.  One of the inventions from that era, the Acorn RISC Machine went on to become the ARM chip that powers just about every smartphone on the planet.

If you're from that era and still recall the thrill of a programming a micro with 48k of memory in Basic, I'm sure you'll find the story as well as the soundtrack a nice blast from the past.

You can find Micro Men on YouTube as well as the usual torrent sources...

If you've got memories of these old micros feel free to add your comments below. (Also, if anyone has a spare 48k Spectrum to donate, please let me know.) 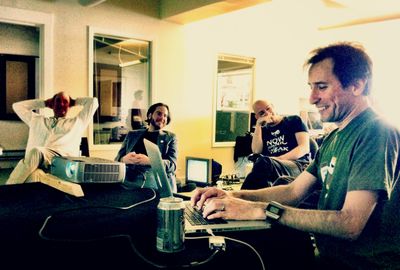 Dan Fabulich (above right) does a great, or dare I say, fabulous job organizing the local San Francisco Interactive Fiction meetup.  Meetings occur the first Saturday of every month and are generally in or around Berkeley or Oakland area.  Last week we met at the Musueam of Art & Digital Entertainment (MADE) offices in Oakland.  There was a lot of catching up on what everyone is up to, speculation on recent rumors about Steam's console PC, discussion of Double Fine's forthcoming Adventure game.

Then we dove into a group session trying to solve Infocom's notoriously difficult Deadline interactive mystery game.  We had to dive into some online clues, but a good time was had by all.  Heck, Dan even brought pizza.  What a mensch!

Next meeting is April 7.  Hope to see you there.