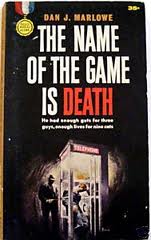 I've long been a fan of hardboiled detective stories, whether in fiction, games or movies.  Dan Marlowe is probably high among the ranks of long forgotten noir authors.  I discovered him after a reference by Stephen King in his Hardcase Crime original The Colorado Kid

.  Marlowe wrote over 40 books in his career of almost 40 years.

I read Marlowe's book The Name of the Game is Death

on my Kindle and was immediately hooked.  His style is certainly gritty, but it's also gripping. He's not necessarily writing about good guys, either.  His characters can be pretty nasty, but they are not completely without principles.  Marlowe worked as an office manager, bookkeeper, PR agent, salesman, and a gambler before settling in on his career as an author.  He also befriended some pretty unsavory characters including convicted bankrobber-turned-author Al Nussbaum.  In later years, Marlowe actually suffered from one of the biggest noir tropes ever: he had a serious case of Amnesia.

Many of Marlowe's books have been reissued on the Kindle for around $3, so it's well worth picking up a few. Hardcore noir fans may also enjoy a recent biography about the life of Dan Marlowe called Gunshots in Another Room

I'll admit, I'm a bit of a sucker for old-school Interactive Fiction.  So I went ahead and bought what looks like a great retro cyberpunk noir game called Cypher by the Cabrera Brothers, two enthusiastic gamers from Buenos Aires, Argentina.  I'm not sure when I'm going to have time to play it since I'm already behind a backlog of work, games and real life.  But I thought the web site and game feelies looked so cool, I just had to support their efforts.  Also, it was on sale.

Here's a video the good brothers put together.

Cypher appears to go beyond the classic Inform-style all-text layout to provide a split screen approach with graphics and sounds that add to the atmosphere.  Some of the press reviews look pretty good, but there's been a lot of questions raised about the grammar and limited capabilities of the homegrown parser.  Lets hope it's not a triumph of style over substance and they put some more polish in those areas with additional updates.

The Last Express on iOS 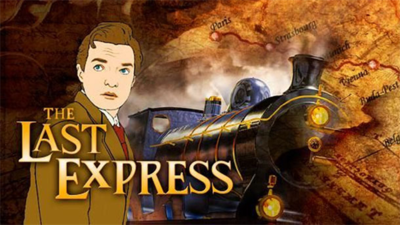 Jordan Mechner's graphic adventure game The Last Express has been ported to iOS and is now available in its full rotoscoped glory for iPhone and iPad.  It's a classic murder mystery set in 1914 at the onset of World War I and takes place on the Orient Express as you travel from Paris to Constantinople.

The original game took almost five years to create and was widely heralded upon its release in 1997.  Mechner combined Hitchcock-style storytelling in a game that was rich with visuals and had a dramatic background soundtrack.  Unfortunately, The Last Express fell victim of weak marketing and disappeared from site within a year.  Though the game was widely praised, it never got the audience attention it deserved.

Luckily, French gaming company DotEmu has ported The Last Express to iOS and it's available for the bargain price of $4.99 --less than the price of a decent beer in San Francisco and far less than the original PC version.  And considering that The Last Express offers 15-20 hours of game play, it's a steal.  There are 30 different characters in the game ranging from Russian anarchist to British spy, all of whom play a role in a mystery that you have to unravel.  The game takes place more-or-less in realtime, and the outcome depends on timing as much as careful sleuthing.  But don't expect to solve this in one sitting and without getting killed a few times.  Luckily the game has a built in rewind feature as well as multiple levels of hints.

Despite the fact that The Last Express is fifteen years old, the story remains compelling, much the same way that a classic black & white movie can outshine the latest 3D gimicks from Hollywood.  And even if the game controls are not perfect, I found them easy to use.  The result is an engaging game experience even for those who aren't intrigued by nostalgia. In many ways, The Last Express is Mechner's most dramatic work, and I hope that the rumors of a film adaptation come to fruition.

Mechner is also famous creating Karateka and Prince of Persia games on the Apple ][ computer back in the 1980s.  Prince of Persia spawned multiple sequels and remakes over the years as well as a blockbuster Hollywood movie, for which Mechner was a producer and the original screenwriter.  Mechner published his original design journals as The Making of Prince of Persia

Here's the official iOS trailer for The Last Express: