The Return of Dennis Wheatley 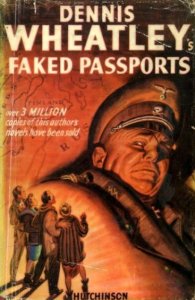 Dennis Wheatley, one of Britain's most famous novelists and whose career spanned 5 decades, will finally see his books available electronically in a new ebook series to be published by Bloomsbury Reader.  Wheatley's first novel, "Forbidden Territory" was written in 1933 as a means to stave off creditors to his failing wine business.  The book was reprinted 7 times over 7 weeks and became an international bestseller.  Wheatley went on to publish more than 50 novels and was the second bestselling British author after Agatha Christie, selling more than 50 million copies of his novels.

While Wheatley is perhaps most famous for his occult books ("The Devil Rides Out" etc) he was also a prolific author of adventure, espionage and science fiction, publishing more than 50 novels, 4 crime dossiers as well half a dozen historical works and biographies.  Less famously, Wheatley was a member of Churchill's Joint Planning Staff in the Offices of the War Cabinet where he helped plan deception strategies against the Germans during WWII.

Unfortunately, as tastes changed, Wheatley's British Empire themes and upper class characters felt increasingly out of date.  His books have been out of print for many years; even used copies are hard to come by.  I hope that Bloomsbury Reader will re-introduce Wheatley's works to a new audience, much the way Hard Case Crime has republished hardboiled pulp novels of the 1940s and 50s, along side more recent works.

I've been reading "Faked Passports", Wheatley's 1940 novel about the "Winter War" between Russia and Finland in 1939-40.  Despite his dated style and occasionally awkward prose, Dennis Wheatley remains a heckuva good story teller. 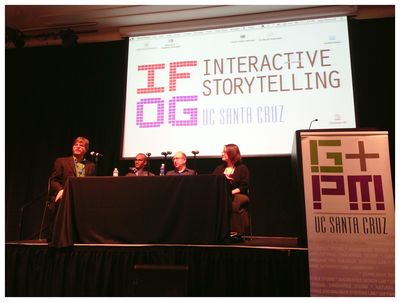 UC Santa Cruz recently held their second Inventing the Future of Games (IFOG) conference at the Computer History Museum in Mountain View.  While the conference definitely has a lot of thoughtful discussion, it's not overly academic, in that it draws speakers and participants from the commercial gaming industry.  This is of course, much smaller than the Game Developer Conference (GDC), but still drew top talent.  The nice part about a smaller conference like this is you can actually ask questions of the speakers and get to meet them on the breaks.

Michael Mateas from UCSC Center for Games & Playable Media gave a great opening presentation, getting to the heart of the tensions between game playing and storytelling and encouraging developers to get over the debate and just focus on good games.  Mateas called out several interesting game development platforms and tools as well as some interesting creative games.  He also emphasized that there isn't one unified theory of gaming -- instead there are lots of interesting & divergent approaches that can be taken.

Warren Spector, one of the longest tenured game designers, gave a wonderful keynote that compared gaming to other media including movies, television, comics and urged designers not to borrow too heavily from other media.  While there are plenty of parallels, gaming is truly unique and it continues to evolve as its own distinct form.  While I'm inclined to agree that the world might not need another First-Person Shooter Wolfenstein game, I still appreciate the thrill of a good Sci-Fi Nazi shooting game.  Spector was critical of our current level of artificial intelligence in games and suggested that designers go beyond traditional combat AI to focus on better interaction. 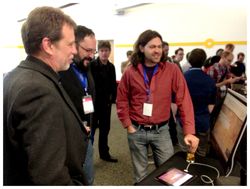 The conference also had a demo area that featured interesting new tools and interactive fiction projects, including Aaron Reed and his latest storytelling project, 18 Cadence.  I would have liked to see short "lightning" presentations on some of these projects, or even updates or challenges from a broader range of indie or student game designers. But it was still nice to have the demo area.

Several panel sessions were held that enabled designers to get up and talk for 10-15 minutes on loosely interrelated topics.  I thought all of these panels were good, but the format seemed a bit odd to me -- they weren't quite full-blown presentations but there also wasn't much interaction between the panelists.  Perhaps shorter up front presentations would have enabled more discussion between the panelists and the audience. But I can appreciate the fact that the organizers were able to pack in quite a lot high quality content using this format.  My head was practically spinning by the end of the day.

I've posted some additional photos on PicasaWeb below from several of the presentations and panels.

One of the highlights of the conference was an afternoon panel session called "Tools & Authorship for Next Generation Narratives."  This featured three distinct presentations from Asa Kalama of Disney, independent game designer Stéphane Bura and Emily Short from Linden Labs.  Emily Short's contributions in the area of Interactive Fiction are almost legendary.  Not only did she help on the development and documentation of Inform7 but she is also renowned for the groundbreaking games she has created. She spoke about her work on Versu, a new interactive storytelling platform that she has developed at Linden Labs.  I've posted a video (slightly edited for YouTube) which provides more detail.

Overall IFOG was a fantastic conference and I applaud UCSC and all of the speakers for putting on this event. I hope they will continue IFOG on an annual basis.  If you were able to attend the conference, please feel free to add comments about what you liked best or would like to see at future conferences.