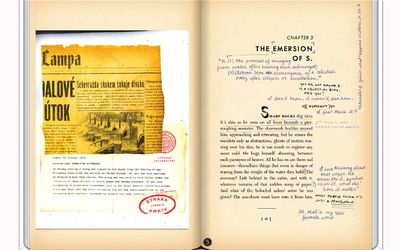 " written by Doug Dorst.  The book is built on a mythic turn of the century novel "The Ship of Theseus" by a mysterious VM Straka.  More importantly, the book, which is made to look like an old library volume, includes margin comments from two college students, old letters, post cards, photographs, newspaper clippings and other assorted items that provide the reader with all the clues necessary to unravel a larger mystery.  Sound familiar?

In an LA Times story, Abrams acknowledged his childhood fascination with the crime dossiers of bestelling English author Dennis Wheatley:

He hit upon the idea of “S.” after discovering a novel that had been left behind by another traveler, and he drew inspiration from the murder mysteries of British author Dennis Wheatley, who included dossiers of evidence in his books.

“There was one I remember called ‘Who Killed Robert Prentice?’” Abrams said. “It had a torn-up photograph in these little wax paper envelopes. As a child, I remember seeing those. That always stayed with me, that idea of getting a book, a packet, that was not just like any other book.”

"S" Looks like a fascinating old-school approach to meta-level fiction and the production appears to be top notch.  Here's a video from Mullholland Books that shows more details:

There's also an electronic version of "S." available for iPad. Call me old-fashioned, but I think the print version is the way to go.