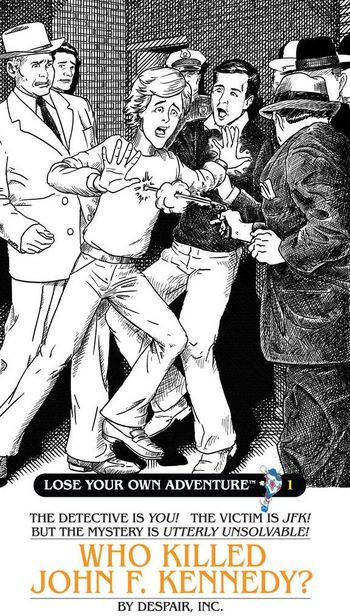 Ever thought about a mashup of Chose Your Own Adventures and Despair Inc's Demotivator posters?  Me neither.  But luckily Justin Sewell, head honcho over at Despair has done just that.  In fact, he's gone one better and tackled one of the greatest conspiracies in modern history with "Who Killed John F. Kennedy?"  It's a modern day parody of those childhood CYOA books complete with feather-haired precocious crime-solving teenagers.  But rather than play it for laughs, Sewell is using his keen wit to question the entire JFK conspiracy and it's theorists.

" film, which was itself largely based on books by Jim Garrison

.  If that's tough to follow, then you ain't seen nothing yet.  "Who Killed John F. Kennedy?" will have you jumping between conspiracy theories faster than attendees at an X-Files Lone Gunmen reunion.  Luckily Sewell includes several pages of endnotes which provide details on many of the most glaring aspects of the JFK investigation.  I got the feel the endnotes could have easily been another twenty pages longer had the project gone on much longer.  Sewell has obviously researched the topic thoroughly, perhaps even obsessively.  And given the number of choices that you can make in the book, you'll find yourself captivated for hours as you go down the rabbit hole of grand conspiracy theories.  Sewell doesn't take things too seriously though (Sgt Fanucci anyone?) and some of the theories go beyond over-the-top, if that's possible, involving the CIA, the mob and, of course, Area 51.

It's a great concept and the retro design style transforms it into a work of art, especially with the larger format "Deluxe-Sized" edition.  For anyone interested in CYOA, conspiracy theories or pushing the boundaries of art and literature "Who Killed John F. Kennedy?" is worth taking a serious look at.

For those who question whether someone who writes the sarcastic "Demotivator" posters can really step up to a more serious level of work, consider Art Spiegelman's genesis from "Wacky Packages" to "Maus

Note that Despair will also be launching a Kickstarter campaign in September November for the second volume in their "Lose Your Own Adventure" Series called "The Glass Ceiling."

I remember seeing this on the demotivator page but it was either out of stock or "coming soon" for about a year. I definitely want a copy and I want to participate in the Kickstarter, too. Thanks for sharing this to Planet-IF.

I believe the project was delayed for a long time as the scope and complexity grew. But it's here now and it's great!