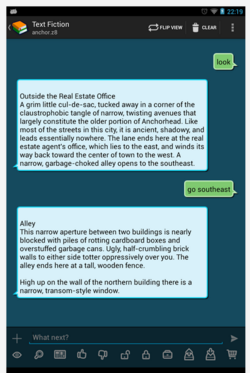 OnyxBits has released a new Android IF interpreter called TextFiction.  While not quite as full-featured as iFrotz on iOS, it looks to do a good job with classic Infocom games using Z3, Z5, Z8 files as well as more modern (and larger) ZBlorb games created with Inform.  It also provides a cool "text message" type of user interface that looks pretty cool.

You can download the app from Google Play or get the source code directly from GitHub.  So if you've got some old Infocom games lying around, or want to investigate modern games written in Inform, TextFiction looks like a good way to bring the games onto Android.  There are plenty of free Interactive Fiction games available on IFDB.

I don't have any Android devices personally, so I've not been able to test it out.  If you're an Android user, let me know how you like TextFiction by posting to the comments below.

It wants all story files to be in its own directory, unlike Twisty and JFrotz, which let you browse for the game.
It's nice that you can download the app directly from the website instead of using a market (which I don't), but all the Android terps except ZMPP let you do that. Although it's visually attractive, TextFiction doesn't really have any killer features. My favorite Android terp is still Son of Hunky Punk, which also supports TADS.

It has the benefit of being really light-weight. Does anything on the android support Glulx games?

In a word, no.
The source code for the alpha release of Twisty 2 includes an implementation of Git, but I can't get that app to find any files at all, Z-code or Glulx. The non-Android version of ZMPP allegedly runs Glulx.
Son of Hunky Punk appears to be in active development, and Glulx is on the to do list (partly working, disabled in the current code). I would expect it there first.