30 Years of Hitchhiker's Guide to the Galaxy 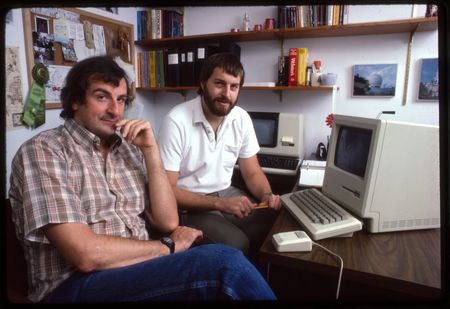 It's hard to believe that Douglas Adams' classic comedy / sci-fi novel is thirty years old.  It's hard to believe because it's not true.  The novel is well on thirty-five years old, the original BBC radio broadcast is a year older at thirty-six, the TV adaptation is twenty-six and the film is just a wee nine year-old.  However, the Infocom game of the same name will be turning thirty on March 8th, so we may as well celebrate that. It's a nice round number, and I like round numbers. 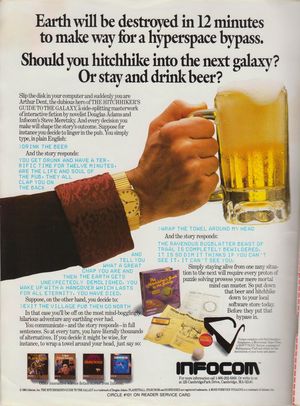 Adams was a fan of technology, computers, games and procrastination.  So what better medium for The Hitchhiker's Guide to the Galaxy than an interactive fiction version from Infocom?

The project was co-authored by Steve Meretzky (above right) who wrote all of the program code as well as significant chunks of the prose, presumably while Adams was busy procrastinating on other projects.  Adams penchant for putting off projects has been well documented over the years and the game's development is  given a detailed treatment by IF historian and game author Jimmy Maher.

Adams subsequently kicked off work on the game Bureaucracy, though he later lost interest and the game went through many co-authors over three years and was eventually published in 1987.  Following this, there were some ill-fated attempts to create a sequel game Milliways: Restaurant at the End of the Universe which was to be written by author Michael Bywater, who had worked on Bureaucracy. Alas, nothing came of these efforts except some rough prototypes, heated emails and plenty of bruised egos. 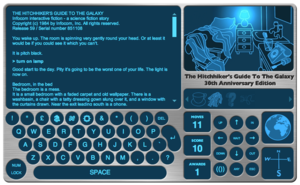 BBC Radio 4  has released an updated online version of the game for the thirtieth anniversary with a fun graphical interface.  You can find it on the BBC site. They will also be re-broadcasting the original radio series.

If you've got a copy of the old Z5 file you can play it with the Frotz interpreter or equivalent on just about any platform around including iPhone, Android, Windows, Mac, Linux, etc. Be warned though, it's a fun game, but remarkebly tough. It's virtually impossible to get through without a walkthrough.

Update: I have updated the links in this story