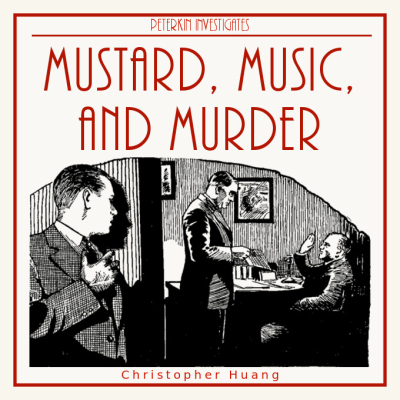 Noted IF author Chris Huang is back in action with a short piece of IF called "Mustard, Music and Murder."  Though the title seems a bit eccentric, maybe that's the point. This is a tie-in with Huang's golden age detective novel "Murder at the Veteran's Club" which is available for pre-order at Inkshares. Although I expect this game to be shorter than his previous murder mystery "An Act of Murder", I'm sure it will be a lot of fun.

"Murder at the Veteran's Club" is published via InkShares and is at the half-way point of achieving it's pre-order goal. For $10 you get the book and help an author who has contributed so much to IF. Heck if you're a first time buyer at Inkshares, you can even get $5 off. I hope many IF fans will step up and support this creative project. Don't just tweet it, buy it.

You can get regular updates at Chris's blog.