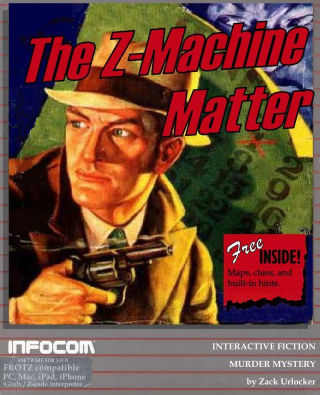 This year, I was fortunate to be able to participate in National Novel writing Month, or NaNoWriMo. The idea behind the Z-Machine Matter had been kicking around for a couple of years getting scant attention. I knew there was a good story to be written, but I just never seemed to have the time to focus on it. This year I was had the time and the inclination.

This was my first NaNoWriMo, but I was not going in unprepared. I had a set of characters, and the basics of a noir murder mystery story crystal clear in my foggy optimist mind. Nonetheless, I spent much of October writing detailed character backgrounds as well as rough outline of the beats in the story, using a three-act structure.

I had previously spent a lot of time researching the time frame of the story (coldwar era 1950) and some of the events of that time, specifically the arrest of Russian atomic spies Klaus Fuchs, Harry Gold and David Greenglass. And as anyone who has fallen into the wikipedia rabbit hole, I did extensive research into a few related areas such as Operation Paperclip (the recruitment of German scientists by the US Army in 1945) and the Venona Project (MI5 and the FBI's joint cooperation to decrypt top-secret Russian cables). Of course, research can easily become a distraction from writing, but I was glad I had done this work previously. 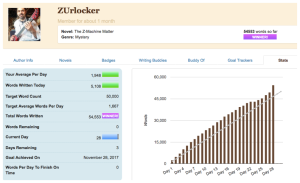 So a few observations on NaNoWriMo... First of all: it works! Yes, there's something to making a commitment to write 50,000 words in a month and then just getting up and writing every frigging day. While I believe only a small percentage of people who sign up for NaNoWriMo hit the 50,000 word target, every writer can benefit from the discipline of writing every day.

The NaNoWriMo approach is based on the idea of just writing for 30 days and not worrying about editing until later. While some might say this puts too much emphasis on quantity as opposed to quality, I think it does serve to help you build momentum. Writing and editing are two different things and for many beginning writers, it's better to just get the words down on paper and worry about making them perfect later on.

However, I think it's also important to note, there's no way I could have written 50,000 words without a solid understanding of my characters and a decent outline. Yes, the story deviates slightly from what I planned, but for the most part the outline worked. And it made it much easier for me to just focus on writing scenes. When I did run into problems in week three, it was because the later sections of my outline were too vague. I wrote every day except for Thanksgiving and even then it was only because I was flat on my back sick with a stomach virus.

There's also a sense of community from having several hundred thousand word nerds working in solitude together for a month. There's some nice #NaNoWriMo camaraderie on Twitter. Heck, I even got a shout out from my favorite author Anthony Horowitz.

The story is roughly 54,000 words at this point. And while it is complete, I think it is probably about 10-15k too short. I expect that I can make some of that up during editing. There's a subplot around a historical document that needs shoring up and I can imagine that taking at least 5,000 words. And some sections are probably heavy on dialog and short on descriptions. I'd also like to add some historical documents (newspapers, letters, diaries, journals, telegrams) to the book.

My expectation is that it will take at least three rounds of editing to complete this story and I'll need an outside editor to help in some areas. My friend Tal tells me he basically re-wrote his book The Punch Escrow three times during editing before it was finished.

And of course there's the whole debate about traditional publishing versus self-publishing as well as various hybrid models that I will need to research. I would love to get input from other authors who have successfully pursued these options. Feel free to leave comments below or otherwise get in touch with me.