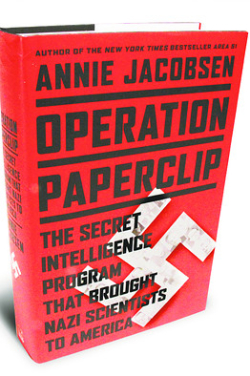 Sounds like Tom Lehrer was actually too easy on him. https://www.youtube.com/watch?v=QEJ9HrZq7Ro

I think Lehrer's song is quite a clever piece of satire. He's called out the hard questions about von Braun. I believe the song is referenced in the book, though I had never actually heard it until now.

Basically the OSS chose to rate all but the most egregious of Nazi scientists as "apolitical." And von Braun engineered his departure from Mittelwerk (by hiding 4 truckloads of plans in a salt mine) in order to better negotiate his team's resettlement with the US.

As damaging as von Braun's V-2 rockets were for London and elsewhere, the staggering fact remains: more people died in the slave labor at Mittelwerk then died from the bombings. An estimated 60,000 people cycled through Mittelwerk with over 20,000 dead, compared to about 2,500 from the bombings.