Last month, Jason Scott, Internet Archivist and director of the terrific Get Lamp interactive fiction documentary, posted an entire hard drive's worth of Infocom source code on GitHub. I thought I'd share a few observations and links to resources that might be helpful to others in exploring this code and the history of Infocom.

The GitHub repositories include the original ZIL source code to thirty classic interactive fiction games from the '80s: Zork, Planetfall, Hitchhiker's Guide to the Galaxy, and my personal favorites, the mystery stories Deadline, Suspect and The Witness. There are also unpublished fragments including the lost Hitchhiker's sequel Restaurant at the End of the Universe, Stu Galley's unreleased Checkpoint game, and an ill-fated tie-in to James Cameron's movie The Abyss. 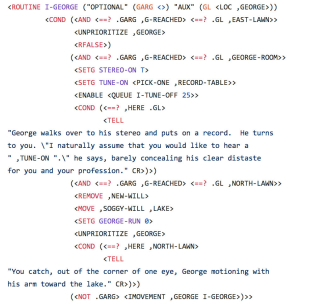 The games are written in a defunct proprietary Lisp-like language called ZIL (Zork Implementation Language). Sadly, I'm not aware of any working compilers that can compile this code, though I understand There are efforts underway to redevelop a ZIL compiler and most of the Infocom games are now compilable. Which is cool since the Z-Machine is the basis of the underlying architecture and virtual machine code systems for games written in Inform.  Infocom published a manual for ZIL for internal use that is available online. Zarf has also posted a helpful article on ZIL. To me ZIL is kind of like assembly language (with (parentheses)), but the code is still fascinating.

The original MDL mainframe version of Zork (also known as Dungeon) was later translated into Fortran and then machine translated into C. These are higher-level languages than ZIL, but still hard slogging. Luckily, Zork was later ported to Inform6 and Inform7.

Some years ago Volker Lanz wrote and published equivalent version of Deadline in Inform6, but it requires an old version of Inform and as far as I can tell there's no compiled binary version of the game. Most likely the author was concerned that this might have been too close for comfort as copyright violation. It will be interesting to see if anyone translates any of these Infocom games into a modern equivalent in Inform 7.

No one seems to have complained about the posting of the Infocom source code, but if it's of interest, I'd get it quick.

For those interested in the history of Infocom and the impact of it's games, I strongly recommend the well-written student research project The History of Infocom (PDF) as well as Jimmy Maher's excellent articles at The Digital Antiquarian.

And for further historical context, here's a link to the Infocom Documentary Scott released along with Get Lamp:

John Yorke's Into The Woods 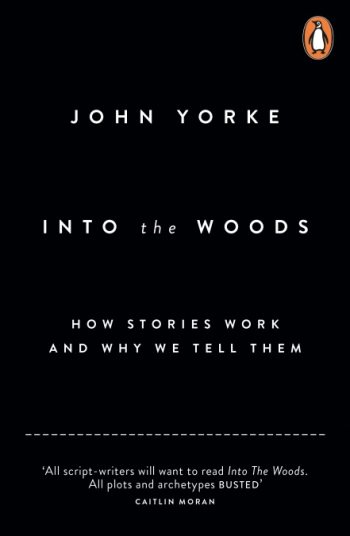 Here's another book for aspiring writers, called “Into the Woods: A Five-Act Journey Into Story.” Although the book is primarily about screenwriting, I think it's quite good for game authors or novelists who want a better understanding of story structure. first of this book on the British Podcast “The Bestseller Experiment.” This is a very well written analysis of story structure by BBC TV producer and script editor John Yorke. Yorke has also worked in radio and video games, so his ideas have quite broad applicability. Unlike a lot of screenwriting books, Yorke is attempting to provide a formula for perfection. Instead he explains why certain structures are used and their impact on the story. So if Blake Snyder's "Save The Cat" and Robert McKee's "Story" seems a bit too formulaic, you might like the more scholarly inquiry that Yorke provides. 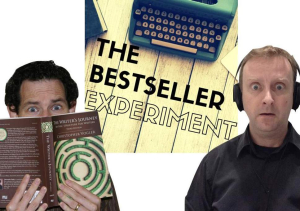 For writers seeking a bit of inspiration, BXP is the best podcast I’ve found on writing: informative, entertaining and motivational. What more could you ask for? It’s the ongoing story of two middle-aged blokes in their quest to write and and publish a bestselling novel called “Back To Reality” --currently on sale for $0.99. They’ve done some great interviews with a number of authors I admire, including Ian Rankin, Joe Hill, Michael Connelly, Taylor Jenkins-Reid and more. 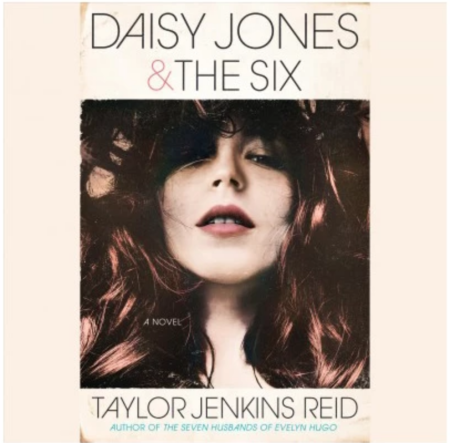 I admit, I have a weakness for rock and roll biogs: The Doors, The Kinks, The Ramones, The Clash, KISS; I've read them all. Hell, I've read and enjoyed biogs by bands like Kraftwerk and I don't even particularly like their music! But it's pretty rare to find a novel that does rock and roll justice. Daisy Jones & The Six comes pretty close to being the perfect rock and roll novel.

The book is told entirely as an oral history charting the rise and fall of a fictional 1970s band Daisy Jones & The Six.  This is quite different from a traditional novel and the story reads like an extended Rolling Stone or MTV interview with a real band. The device works extremely well and pulls you into each of the characters, their foibles, their egos in a way that brings things to life. The story is being told many years after the fact, and the sometimes conflicting accounts are used to great effect in the story. You can still feel the raw emotions of how peoples lives are brought together including all of the joys, pains, hurt feelings and bruised egos. The characters are not always likable and the structure gives the book a bit of a meandering style, but it all comes together in a way that I can only describe as heartwrenching. Jenkins Reid has layered so much drama and emotion into the story that the climax is nothing short of magnificent. She captures the feeling of performance, songwriting, fame and addiction in a way that is truly memorable.

The book had been on my list for a while, but when I heard an interview with the author Jenkins Reid on the highly-addictive Bestseller Experiment podcast, I bought the book immediately on Audible. The book works especially well in audio because each of the different characters is voiced by a different actor. It's a fantastic book which I highly recommend.  The only other novel I know that captures rock and roll is "Evening's Empire" by Former MTV exec Bill Flanagan. Flanagan's book is in some ways both funnier and deeper, but Jenkins-Reid's will may you cry.