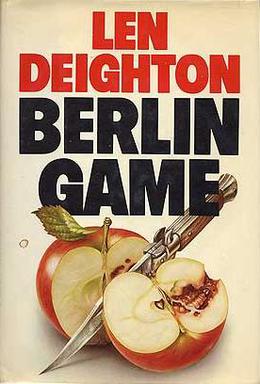 Of all the writers I've enjoyed, there's one that resonates with me more than all others: Len Deighton. Although Le Carré, Chandler, MacDonald and Kerr are all still widely read, Deighton seems to have fallen by the wayside in the last twenty years. He still writes non-fiction, but his last novel was published in 1996. There's only been one adaptation since then, the wonderful 2017 BBC mini-series SS-GB. I'm hoping this will be the launching point for more adaptations and more interest in Deighton.

For fans of espionage, noir or anything in between, I strongly recommend giving Deighton a read. His first novel, The IPCRESS File predated Le Carré's The Spy Who Came in From the Cold and was made into a successful film with Michael Caine. Deighton published fifteen more books over twenty years, mostly set in the cold war. You really can't go wrong with any of Deighton's early books. Funeral in Berlin, An Expensive Place to Die, Spy Story, SS-GB and XPD are especially good. (Four of these early books are packaged as the Spy Quartet.)

But Deighton topped all of this with the publication of Berlin Game in 1982, the first of three books in the Game, Set, Match trilogy. This is Deighton's masterpiece, a complex story of subterfuge, class and betrayal. The story is told from the viewpoint of Bernard Samson, a working class brit raised in Berlin who works for MI5. He's a former field agent, hitting middle age, battling his desk-bound bureaucratic superiors, his in-laws and his past. It's a complex story of the penetration of MI5 by the KGB made deeply personal. Deighton followed this up with a WWII prequel called Winter, which is a wonderful standalone book.

What's amazing is Deighton then went on to write a second trilogy (Hook, Line, Sinker) covering the same story but from a different view point, filling in some missing elements. And then after three fairly forgettable novels in the early 1990's, he wrote a final trilogy (Faith, Hope, Charity) in the same series.

I don't know if Deighton got fed up with espionage or publishing but that was the end of his career in fiction. I'm grateful that Deighton wrote so many wonderful novels. He's still alive and kicking at 90, so I'm secretly hoping maybe there will be one more Bernie Sampson story he wants to tell. You never know.

I've read many of Deighton's novels two or three times. His books are a master class in storytelling with complex characters, sparkling dialog and brilliant subtext. I'm re-reading this series now, looking for ways to improve my own writing.

For those seeking more information, I recommend The Deighton Dossier which covers all of Deighton's work, both fiction and non-fiction, his writing process, interviews and more.