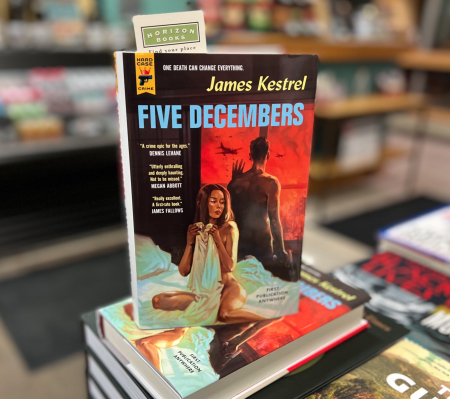 Every now and then a book comes along that you have to tell people about. It grabs you, holds on to you and the only way to release the energy is to share it with others. Five Decembers by James Kestrel is that kind of book. It's the best book I've read this year.

The book starts as you might expect in a noir crime novel. But that's not giving Kestrel full credit. He's a student of the genre and, like his main character Honolulu Police Detective Joe McGrady, he knows what he's doing. Kestrel is laying the scene in the first couple of chapters as McGrady investigates a murder. But really, he's setting McGrady up for a fall.

It's November 1941 and the book is imbued with the atmosphere of pre-war Hawaii. There's a tension in the air and Kestrel paints an apt picture of Chinatown, the seedy harbor brothels and the sweat and smoke of the police station right down to the captain's 15c benzedrine inhaler. Given the navy build-up you might think you know where things are going, but like McGrady, you haven't a clue. I'll I can say is he lands in Hong Kong December 7, 1941. And from there, it becomes a very different story. Yes it's a noir crime story, but it's much more than that. It's an epic story of love and war and faith and betrayal.

Although this is the first book under this name, this isn't Kestrel's first rodeo. He studied at the world-renowned Interlochen Arts Academy writing program under Jack Driscoll. He's written six other well-received novels. As historic noir fiction, Five Decembers was a departure and two-dozen publishers turned it down before Charles Ardai at Hard Case Crime took it. Although the path could have been easier for Kestrel, I'm glad it landed with Hard Case Crime. Ardai is also a student of the genre and he likely understood and appreciated the significance of the book more than others. 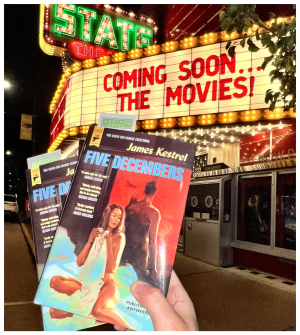 I've read a lot of Hard Case Crime over the years, starting with their first book in 2004 by Lawrence Block. They've published some great authors including Stephen King, Max Allen Collins, Michael Crichton, Donald Westlake, Ariel S. Winter, Scott Von Doviak and others. Kestrel is right up there. In fact, I'd say Five Decembers is the best book Hard Case Crime has ever published. No surprise, he's got great reviews in the New York Times, Kirkus, Publisher's Weekly and elsewhere. This book would make one helluva movie.

With this book, James Kestrel earns his spot as one of the "Three K's of Historic Fiction" alongside Philipp Kerr (Berlin Noir) and Joseph Kanon (The Good German).

Bottom line, this is an absolute page turner. Buy it now and put it at the top of your reading list.