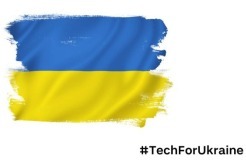 A few days ago, Gatsby, the company I work for, took the unusual precedent to condemn the military invasion of Ukraine by Russia. Why is a small tech company making such a statement? As has been often said, the only thing necessary for the triumph of evil is for good people to do nothing.

Ukraine is a country with a rich history of technology and entrepreneurship. There are tens of thousands of entrepreneurs, developers, designers, scientists and engineers employed in the technology industry. Ukraine has become part of the global technology industry. They have shown great leadership and innovation with companies such as Affirm, Gitlab, Grammarly, JustAnswers, PandaDoc, Preply, Sisense and many others.

Gatsby, though a small company, is also global, with employees and customers in many countries around the world. We are part of an open source movement that enables anyone to use our technology to build web sites.

Global technology and open source software enable the world to be a better place for everyone, providing opportunities for developers in every country. We believe in the forward progress of technology to enable people to develop better lives for themselves, their families and their communities.

Putin’s invasion of Ukraine is a threat not only to Ukraine but to worldwide democracy. The attack upon Ukraine is destroying the lives of millions of innocent people.

In the world of tech, we have witnessed the immense constructive power of open sharing of ideas, and voluntary collaboration. We have built models where people can disagree yet productively work together across the globe.

We believe in a world with a level playing field where anyone can aspire to become the best version of themselves. A civilization where ideas and opinions can clash but people respect each other.

The war initiated on 24 February 2022 by Russia against Ukraine is not only an attempt at subduing one nation, it is an assault on democracy. It is an ugly strike against the rule of law. As Martin Luther King reminded us: injustice anywhere is a threat to justice everywhere.

That is why we are now speaking up. What we are witnessing is an assault on everything we believe in. At risk is the very foundation that societal progress has been built on over the past 80 years. We cannot stand by and ignore these actions.

We are taking action today to condemn this invasion. We are making a donation to Unicef to support the people of Ukraine and I encourage others in our community to do the same by donating to one of the many organizations that are helping.

The future of democracy is playing out right now in the streets of Kyiv. It matters to each and every one of us. Do not look away. Remember the only thing necessary for the triumph of evil is for good people to do nothing.

Support in the Tech Community
We will update this list with additional statements of support over time.