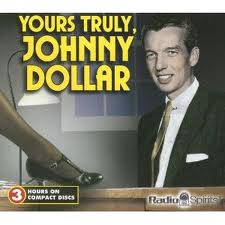 The Old Time Radio (OTR) show "Yours Truly, Johnny Dollar" was one of the longest running detective radio shows broadcast for 12 years on the CBS network from the late 1940s onwards. My brother turned me onto this show some years back and I've found the stories have a certain charm that grows on you. Yes, it's old school, slightly hokey, but the writing and acting were consistently among the best ever done on radio. If you're looking for stories to inspire your own writing, you could do a lot worse than some of the old time radio shows that are out there.

Johnny Dollar is a freelance insurance detective called in reach week by some insurance company to investigate murder, arson, kidnapping or some other insurance fraud. Unlike a lot of hard-boiled detectives from this era, Dollar is actually quite a decent and warm person. He has a soft spot for the ladies and is always willing to go out on a limb for justice or to defend a wronged individual.

There are over 700 of the original recordings available today in the public domain at www.archive.org, OTR.Net and elsewhere. Since the show ran for 12 years, there were changes in the cast and format during that time. The best episodes were the five-part episodes starring Bob Bailey from 1955-60 (episodes 233-512).

For those who are curious about "Yours Truly, Johnny Dollar" you can listen to a sample below or head over to Archive.org to listen to or download any of the hundreds of episodes on file. If you don't want to download hundreds of megabytes of MP3 files, you can also order CDs from OTR Cat or from Amazon for about $5 per CD plush shipping.