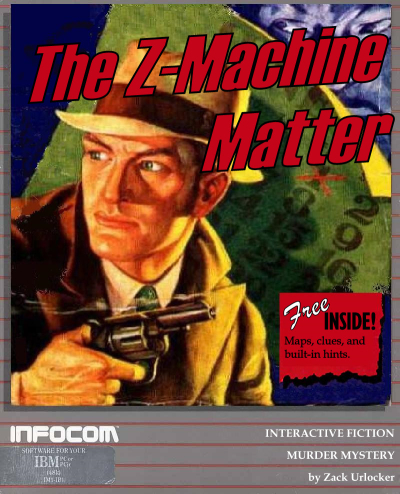 The Z-Machine Matter is my current stalled work-in-progress game, which is once again on a looong hiatus. But while the game is on hold, I did manage to complete a 350 page novel, now called "The Man from Mittelwerk" that is a non-interactive and more compelling version of this story. It's being published by Inkshares in September, 2022. So maybe at some point, I will get back to the game.

The Z-Machine Matter a murder mystery story set in southern California during the cold war 1950s. It's written in Inform7 as an homage to Infocom's classic murder mystery stories like Deadline, The Witness and Suspect, complete with built-in hints, Infocom-style packaging, manual and feelies.

I submitted version 0.28 to IntroComp 2011 and have been updating it since then based on feedback. If you'd like to test the game, help with coding, or find out more, contact me via email at ZUrlocker hotmail. Progress is rather slow these days as I've been busy with work, writing and recording a rock-opera and remodeling a 100 year-old house. Nonetheless, I am back at it, working on the story once again.

Manual:
-Updated to include new commands  12/01/2011
-PDF available for download

06/20/2017 ver 0.37
-Code fixes and extension updates to compile with Inform Build 6M62
-Thanks to Dannii and Matt W of Intfiction Forum for assistance! (yay)

06/25/2013 ver 0.34
-Added Harry Gold to wedding photo
-Finished puzzle about the wedding photo
-You can now SUMMON Duffy in Act 2
-Hid some items in the den and barracks
-Added CLUES command and * on status line to indicate items to be found
-You can also turn CLUES ON or CLUES OFF or use the Help Settings menu
-Added wireless set as a clue in basement

12/01/2011 ver 0.30
-Added CLUES command and * on status line to indicate items remain to be found
-You can also turn CLUES ON or CLUES OFF or use the Help Settings menu
-Added wireless set as a clue in basement
-Lots of work on the writing!
-Incorporated many suggestions from IntroComp

06/01/2011 ver 0.28
-Added a map to the manual. (What? There's a manual?)
-Added a cliffhanger scene to end the Alpha release.
-Added commands WAIT 10, WAIT UNTIL 10:30 PM
-Many new commands understood based on alpha tester feedback.
-New commands: CONFRONT, TOPICS, SUSPECTS, ABOUT, CREDITS, HINT. 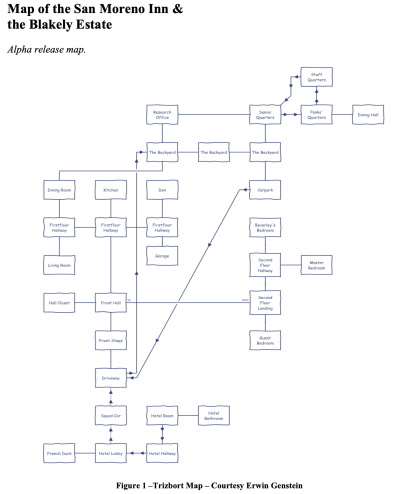